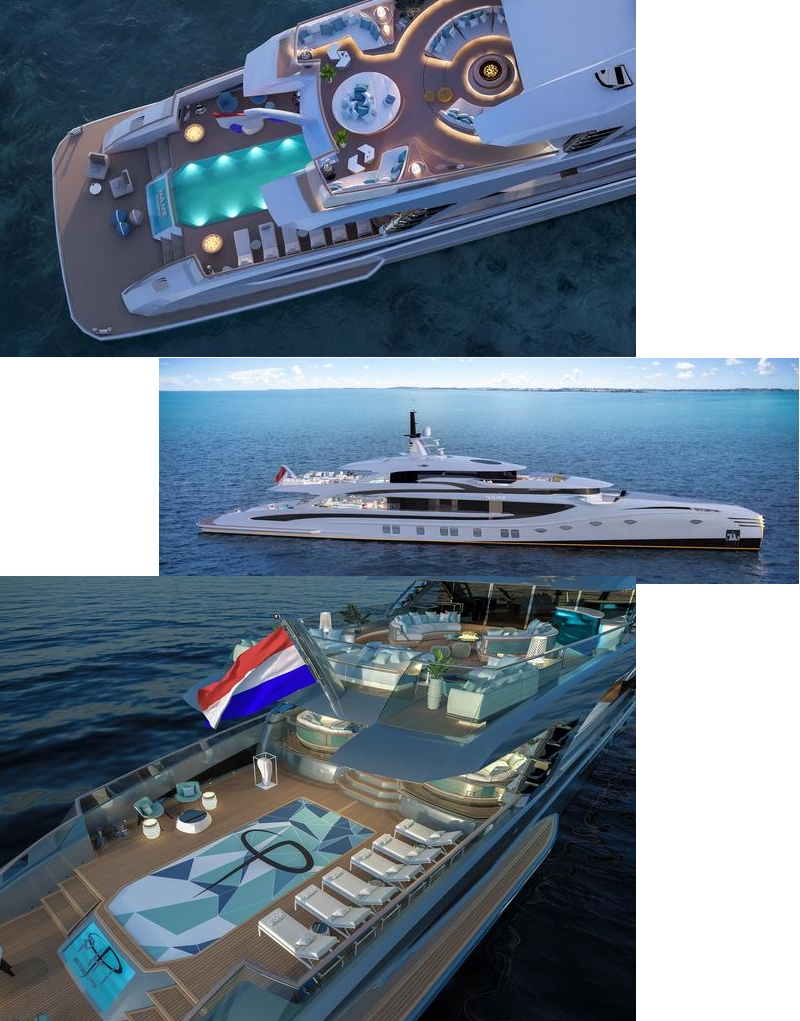 Royal Huisman’s  PHI yacht offers significantly more exterior and semi-interior entertainment area on the aft deck than conventional designs, and instead of a typical “wedding cake” silhouette, she will have a very sleek and appealing low profile.

Apart from the fact that PHI has an aesthetic story to tell, she also fulfils the Owner’s wish for a technically highly advanced vessel that sets new standards. First of all, when PHI “hits the water” in 2021, she will be the longest sub-500 GT motoryacht in the world. The Owner wanted to achieve this without compromising on the highest quality standards. As a natural and logic result, the project ended up with Royal Huisman, the best sailboat builder in the world.

Complementing motoryacht PHI will be a 36m / 118ft shadow vessel, currently under construction in Asia. Carrying the same DNA as her bigger “beauty queen” sister, the shadow vessel is the hard working sibling. Both she and the onboard Owner’s limousine tender will have Cor D. Rover styling and a patented Van Oossanen Fast Displacement Hull, but her “make-up” will be a no-filler-matt-finish (albeit in the same color scheme as her big show-off sister).

Royal Huisman revealed that the designers wanted the upper deck, where the Owner has his penthouse apartment, to be closest to the skies, to follow the PHI philosophy with a focus on the galaxy. The main deck, where most daytime guest activities happen, has a more horizontal focal connection with the ocean surface, whereas the lower deck, physically rooted in the water, is strongly ‘connected’ with the underwater-world. 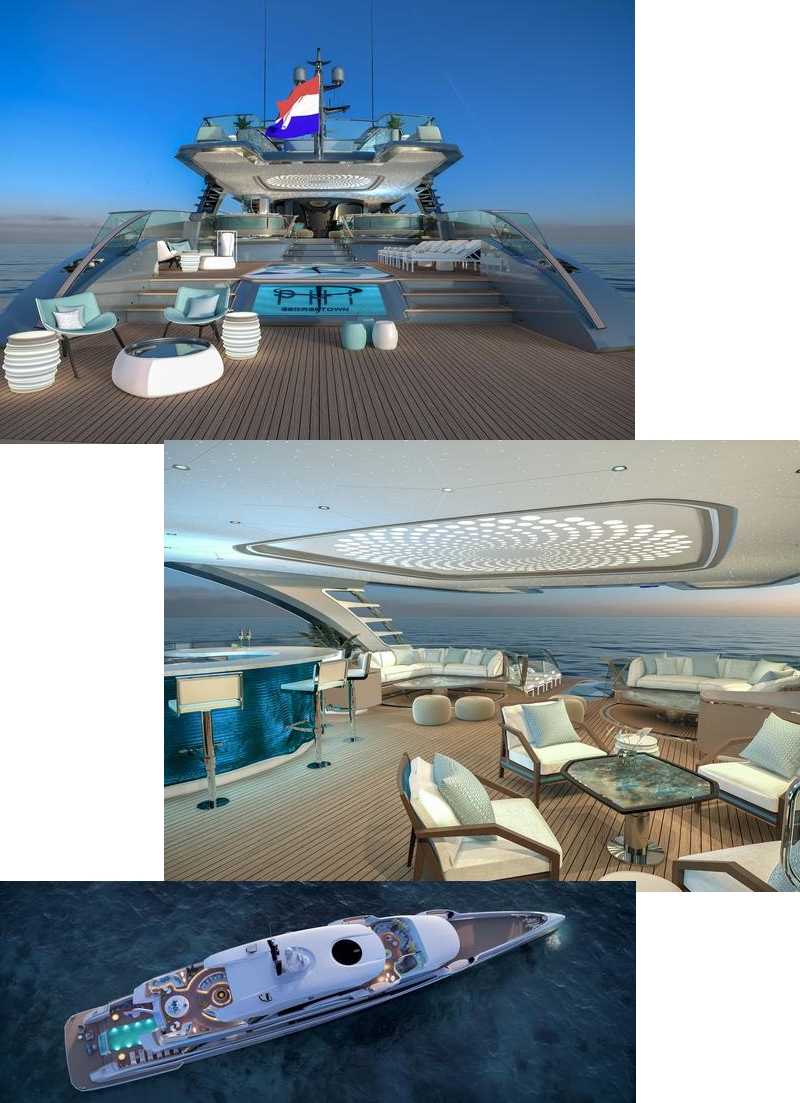 “The resulting overall design speaks a very organic visual message, and will all around the deck show a range of subtle hints to the natural world that surrounds the yacht” explained Cor D. Rover, responsible for PHI’s general concept, exterior design & interior layout.” If you should have an opportunity to visit PHI you will find that, no matter where the Owner will take you, he will have a story for you: why details look like they do, and what has been the thinking behind them.”

“By using Van Oossanen’s XL Fast Displacement Hull Form, PHI will be extremely fuel efficient. Given the fact that there are no electric chargers between the Azores and the Caribbean, this is the best thing we can reasonably do at this moment, trying to burn as little fossil fuel as possible until the day renewables will be the reliable mainstream,” added Cor D. Rover.

Another “first” can be found on the pool deck with Cor D. Rover’s patented DEPP swimming pool. This pool uses a minimum volume of fresh water since the body of water can stay in the pool, heated and treated overnight, when not in use. The pool itself turns into a sealed tank and visa-versa at the touch of a button, avoiding lengthy pumping of water in and out of a separate, dedicated dump tank, which means, guests can first play a game on top of the flush pool cover and swim within 5 minutes in the pool that’s underneath.

Cor D. Rover continues: “A cool gimmick can be found in the lower deck lobby where we created an infinite wine-cellar.” What this means? You will have to exercise patience for a couple of months to see it with your own eyes…! 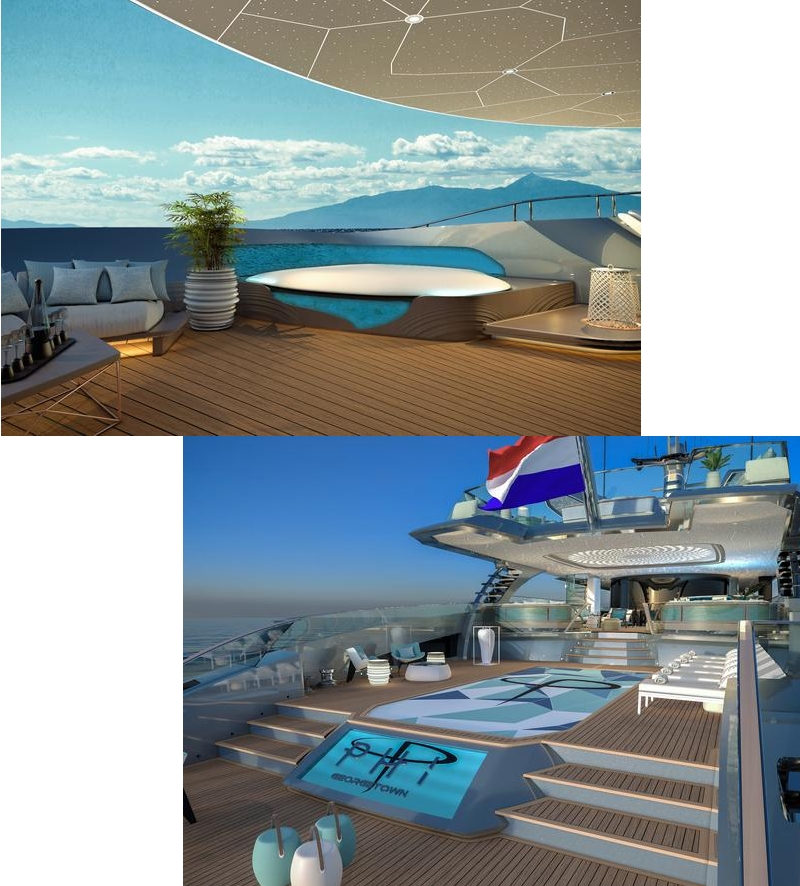 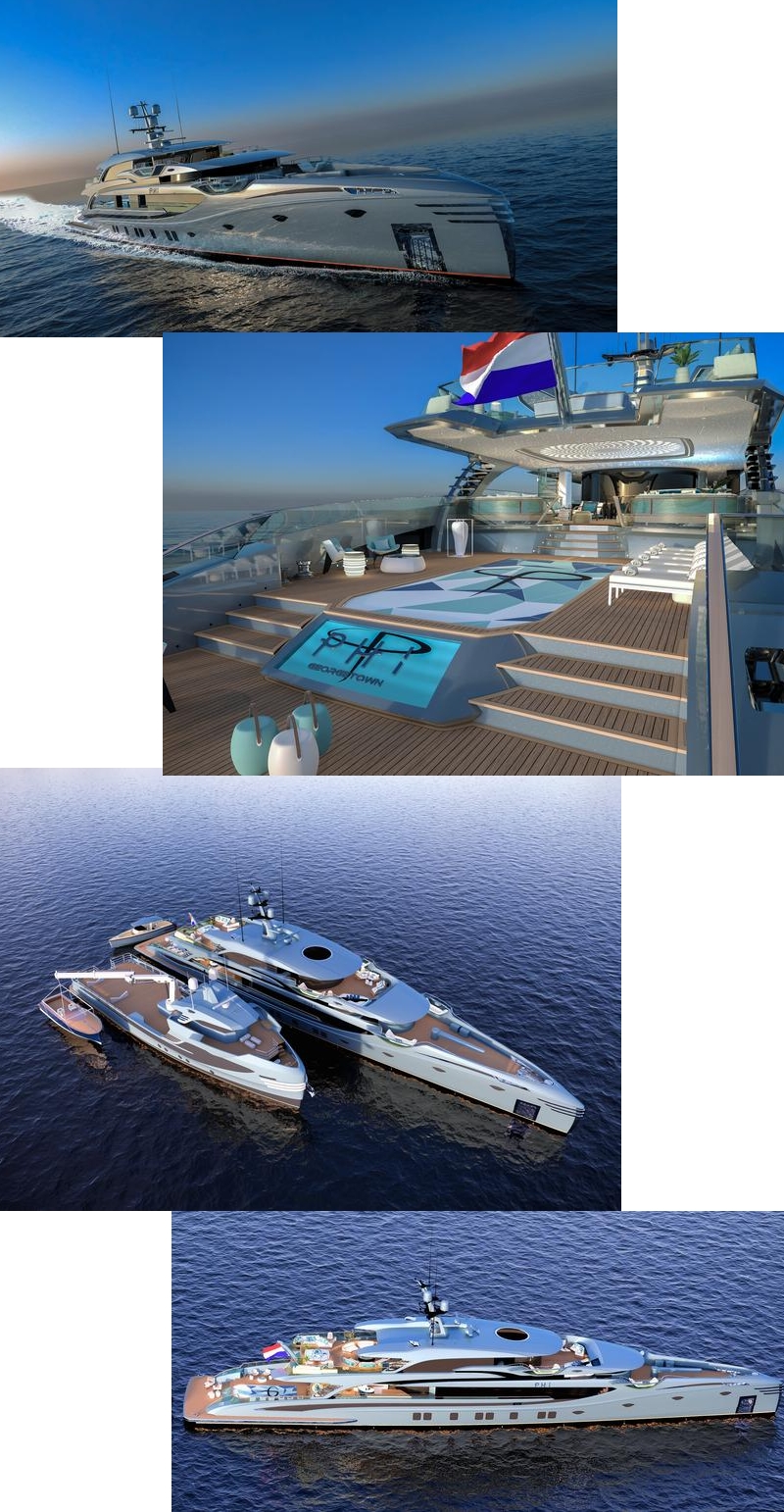 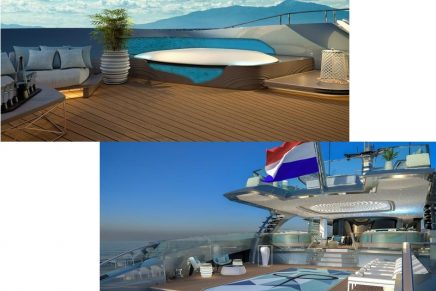 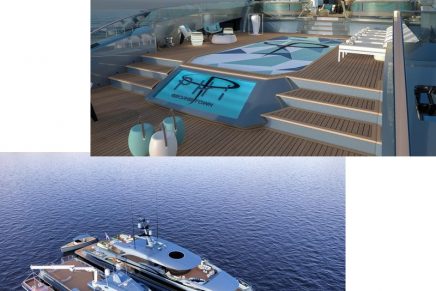 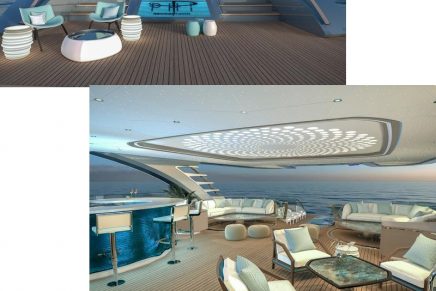 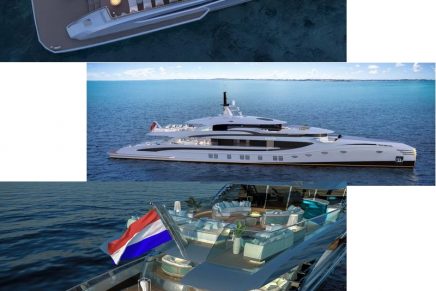