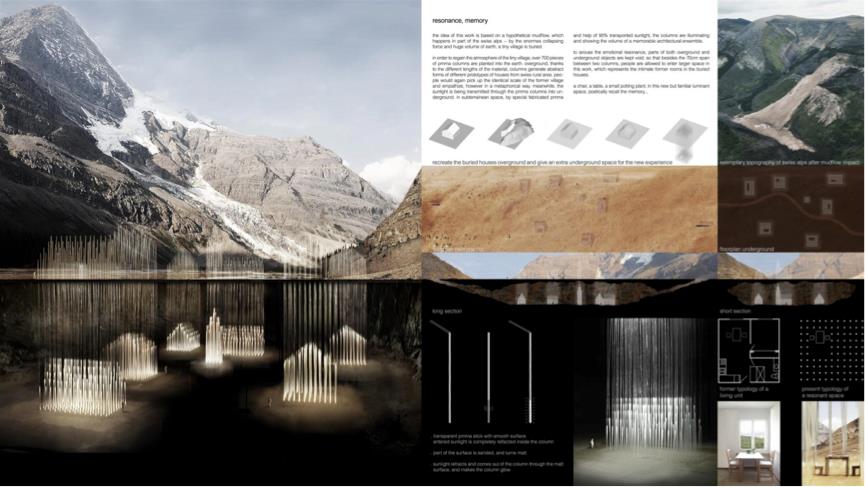 A team of two students of architecture from ETHZ in Zurich, Switzerland, took the International VELUX Award 2012 for their poetic project “resonance, memory”. In 2012 the International VELUX Award for students of architecture was presented for the fifth time. The interest in the theme of “Light of tomorrow” was once again overwhelming. 983 projects 59 countries is an impressive result, stressing the eternal relevance of daylight and architecture.

According to the winning students the conception of their project has been driven by a strong desire to move architecture beyond the physical world to arouse emotions.

“The first prize project is impressive because it addresses three distinct scales very eloquently, very powerfully and in a more comprehensive manner than any of the other entries”, said jury chairman Brigitte Shim in her motivation for the winning project.

In the beautiful setting of the Serralves Museum by the legendary architect Alvaro Siza in the Portuguese city of Porto more than 150 invited guests attended the award ceremony of the International VELUX Award 2012 and took part in the celebration of the 14 winner teams.

“Light of tomorrow”, the theme of the International VELUX Award was a great inspiration to first prize winners Ge Men and Bo Li. They saw the international VELUX award as an exciting challenge and a great platform for sharing their idea.

“Nowadays, more and more architects are trying to think outside the box and the theme of IVA is just the right topic to make us go back to the core of that box. We find this way of thinking incredibly interesting and necessary for architecture in the contemporary architecture scene.”

Their project “Resonance, memory” was partly inspired by some of the many hiking trips that they have been enjoying in their spare time and partly by a desire to move architecture to another level in which architecture moves beyond the physical world and arouses emotions.

“It is our belief that the more artificial our world becomes the more we want to go back to nature. So, in our opinion, the theme “Light of tomorrow” works as a reminder of the fact that we can work with both artificial and natural light and that the two can work together,” says Bo Li.

Although both Bo Li and Ge Men were busy doing a full-time internship and a semester at a studio, respectively, they decided that IVA would be an interesting challenge and decided to dedicate their evenings and weekends to the project.

“We quickly realized that we needed to work with physical models in order to test the effects fully. By having real models we were able to see the effects with our own eyes, touch them with our hands and in that way experience our own ideas.”

The team was very thorough in their work. They bought different kinds of optical fibre and tools in Zurich, found other materials on eBay and even asked former colleagues in China to buy materials for them and have them shipped to Switzerland.

The International VELUX Award for Students of Architecture takes place every second year, next time in 2014.