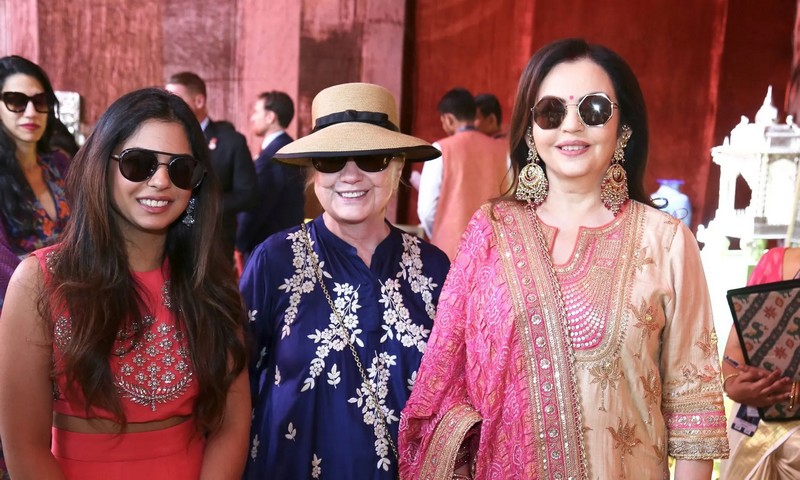 This article titled “Isha Ambani wedding: Beyoncé and Hillary Clinton jet to India for celebration” was written by Guardian staff and agencies, for The Guardian on Monday 10th December 2018 02.05 UTC

Celebrities including Beyoncé, Arianna Huffington, Sachin Tendulkar and Hillary Clinton have arrived in the Indian state of Rajasthan for the wedding of the daughter of country’s richest man.

Dozens of chartered planes flew into Udaipur for celebrations to mark the wedding of Isha Ambani and Anand Piramal, which has been dubbed locally “the big, fat Indian wedding”.

Ambani, 27, is the daughter of Reliance Industries chairman Mukesh Ambani, who is ranked by Forbes as India’s richest man. She will marry Piramal, 33, in the financial capital of Mumbai next Wednesday, but the celebrations began over the weekend in the city, with feasts, singing and dancing, and other pre-wedding rituals.

Ambani graduated from Yale in 2014 and has since joined the board of directors of two of the companies within her father’s Reliance empire. In 2015, Forbes named her as one of Asia’s women to watch.

The Clintons and the Ambanis have an association that goes back more than 18 years and have met several times both in India and abroad, according to Indian media reports. In March this year, when Hillary Clinton visited India to deliver a keynote speech at a conference in Mumbai, she dined with the Ambanis at their 27-floor Antilia residence – one of the world’s most expensive homes, according to local media.

Related: Priyanka Chopra: ‘She was not going to be another pretty girl’

Others in attendance at the wedding include Indian steel magnate Lakshmi Mittal, James Murdoch, Bollywood actress Priyanka Chopra and her husband, singer Nick Jonas, who were married last week in extravagant celebrations in the Rajasthani city of Jodhpur.

Guests for the celebrations, which will bring together two of India’s most influential families, have access to an app mapping out the activities, which include a private concert by Beyoncé.

Many in India, where millions live in dire poverty, have closely followed the preparations, including the couple’s engagement at the luxury Villa D’Este hotel on Italy’s Lake Como, attended by more than 600 guests, and featuring a private performance by singer John Legend.