The Frecce Tricolori Chronomat 44 and the limited edition 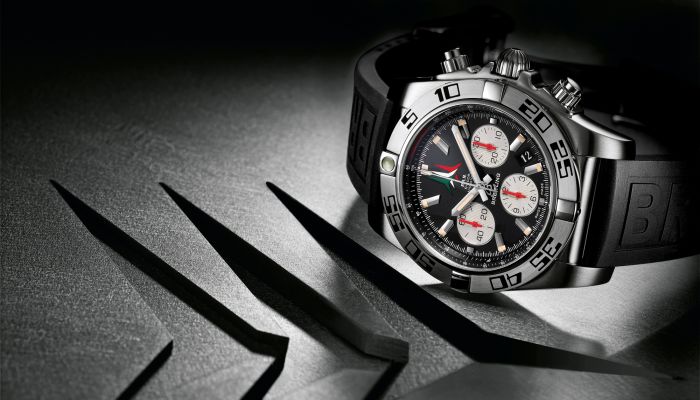 Breitling and the Frecce Tricolori, the Italian airforce aerobatics team unveiled a new Chronomat 44 bearing the flight team’s livery, along with a limited edition featuring the same design.

In 1983, Breitling worked closely with pilots in order to create an authentic aviation chronograph. A year later, in 1984, it was based on this ultra-functional, original and elegant watch, that the brand launched its famous Chronomat – that has since become its star model and was recently reinterpreted.

Almost 30 years later, Breitling is perpetuating these ties by creating for the Frecce Tricolori – a special version of the Chronomat 44 customized in the team colors.

Composed of three arrows in the red, white and green colors of the Italian flag, it is topped with the inscription “P.A.N Frecce Tricolori” (P.A.N. standing for Pattuglia Acrobatica Nazionale). The caseback bears the engraved silhouette of the ten Aermacchi aircraft composing the squad.

Water-resistant to the exceptional depth of 500 meters (1,650 ft), the watch houses Manufacture Breitling Caliber 01, a highperformance chronograph movement entirely developed and produced by Breitling, and chronometer- certified by the COSC.