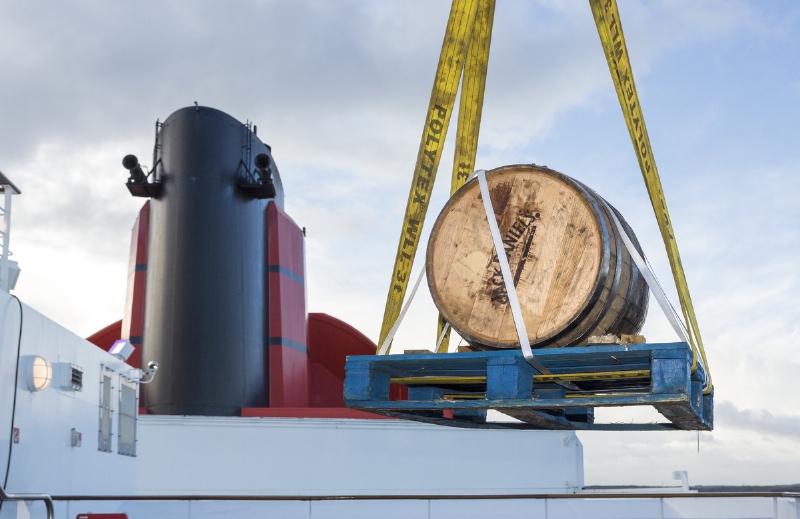 The Savoy London joined forces with CUNARD and Jack Daniel’s UK to launch a unique collaboration on board the Queen Mary 2. This January (2016), Cunard, The Savoy and Jack Daniel’s produced Age of Discovery – a specially created, barrel aged, limited edition cocktail. The cocktail itself will mature in a hand chosen 300 litre, Jack Daniel’s barrel taken on board Cunard’s flagship Queen Mary 2 during her 41,000 nautical mile, four-month World Voyage (January 10, 2016 – May 10, 2016).

Age of Discovery has been formulated by the team at the world-famous Savoy Beaufort Bar, named Best International Hotel Bar 2015.

Inspired and influenced by the tastes and aromas of the continents Queen Mary 2 will visit, from Europe to Asia, Africa, the Americas and Oceania, the Jack Daniel’s cocktail will be mixed at The Savoy before the barrel is sealed and bonded for its World Voyage.

The cocktail itself has been crafted to reflect both Cunard‘s 175-year ocean-going heritage and the decades of history and patronage associated with The Savoy’s famous cocktail bars. Its home for the voyage, a Jack Daniel’s first fill American oak barrel, was carefully chosen by The Savoy’s Assistant Food and Beverage Director, Daniel Baernreuther.

Daniel travelled to the Jack Daniel distillery in Lynchburg, Tennessee and personally chose the Jack Daniel’s Single Barrel to be used in Age of Discovery. Daniel then had the barrel itself transported whole to The Savoy in London. This is the very same barrel that will play host to Age of Discovery for its global journey. During her four-month circumnavigation, Queen Mary 2 will visit 39 ports of call in 27 countries. The barrel will be secured in open deck space for the duration of the voyage to expose it to the varied elements and climates that will influence the final result. Prevailing temperatures, humidity and sunlight – as well as more inclement conditions – will combine to produce this truly unique barrel-aged cocktail.

The progress of Age of Discovery will be charted via social media throughout the passage, across the oceans, and will appear in the world’s most iconic ports and cities. The barrel will also have its own unique Log Book.

When Queen Mary 2 returns to Southampton on May 10, 2016, the barrel will be ceremoniously unloaded and will travel to the specially-commissioned Houston Bottling & Co Pack plant in West Dunbartonshire.

It is estimated that the unique barrel will yield a minimum of 250 litres of Age of Discovery, which will become the latest in The Savoy Collection; one of the world’s most prestigious and unique collections of one-of-a-kind spirits and liquids. Launched in 2013, The Savoy Collection was created with the support of esteemed cocktail experts, Speciality Drinks, to celebrate the rare and the beautiful from the world of drinks.