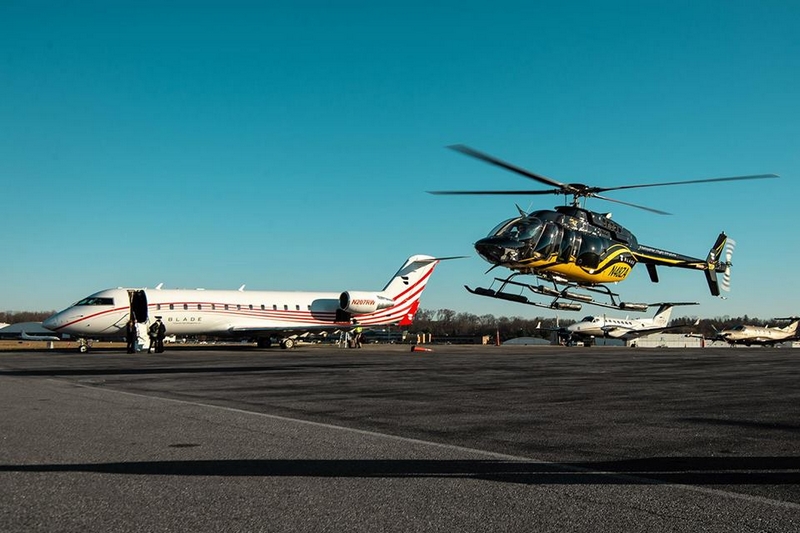 BLADEone is Back with Four Jet Flights Between New York and Miami Every Weekend; photo: @blade.flyblade.com; @facebook.com/FlyBladeNow

This article titled “Only in New York: the services offering helicopter rides to the wealthy” was written by Victoria Bekiempis in New York, for theguardian.com on Friday 21st June 2019 06.00 UTC

While those taking a taxi from Manhattan to John F Kennedy airport this summer can expect a 90-minute-plus crawl at rush hour, more elite New Yorkers will have access to a new eight-minute ride – with a familiar brand attached.

Scheduled to launch on 9 July, UberCopter – yes, that Uber, will offer a helicopter service between a heliport adjacent to Wall Street and JFK, from $200 per person each way.

Buzzing around in a chopper for work or play, against the iconic backdrop of skyscrapers and the Statue of Liberty, has long been a symbol of prestige, prosperity and the frenetic pace of New York life in “the city that never sleeps”.

But while the new services will be seen as a badge of success by some, for others they symbolize the deep inequality in the heart of the city – and potential danger.

“I think it’s ridiculous,” said Kate Stack, 30, a theater worker, speaking to the Guardian in midtown Manhattan, near a heliport where business and tourist choppers buzz in and out. And next to another new signifier of urban opulence: the $25bn Hudson Yards high-rise complex of luxury shops, restaurants and apartments, part of a shifting skyline of ever-more towers inexorably rising “to give the wealthy a better view”.

“It just seems unnecessary. I don’t think it will help a lot of the people. Rich people get into the sky and avoid traffic, and the rest of us have to sit in the car and wait,” she added.

The increase in airport-bound helicopters comes hard on the heels of a 10 June incident when a chopper pilot died after he crashed onto the roof of a Midtown skyscraper.

In May, a helicopter crashed into the Hudson River on Manhattan’s west side. No-one was injured, but a spring 2018 tourist helicopter crash into the East River left five dead and there have been other similar incidents in recent years.

Brian Natlo, 36, a marketing employee enjoying fresh air near the river and Hudson Yards, said he’s apprehensive about the upsurge of airport helicopter travel. “I think multiple helicopters going around isn’t a good idea. Tourist ones are fine but where are all these helicopters going to land?”

Uber car services are already vying to be king of the urban roads. “Where do you draw the line on this?” he said. “Even if Elon Musk” were to launch a program, he said of the billionaire Tesla electric car and space entrepreneur, “still, anything could happen.”

He scoffed at the idea of people needing to take such expensive transportation. “I grew up very humble,” he said.

New Yorkers’ love-hate relationship with helicopters goes back some way.

In 1953, a company called New York Airways started regularly scheduled passenger service between the city heliports and area airports, marking “the inauguration” of such services in US cities, according to a 1977 paper published by Duke University.

But the now-defunct aviation concern yearned for something flashier and won approval to use a helipad on the famous old Pan Am building, near the Grand Central railway station, aviation historian Shea Oakley told the Guardian.

New York Airways hit financial woes in 1968, bringing the services to a premature end but, Oakley said: “They always wanted to get back to the Pan Am roof. That was prestigious, exciting.” Eleven years later, the outfit managed to relaunch Pan Am building helicopter services. But on 16 May 1977, a helicopter’s landing gear failed atop the roof. A blade hit bystanders then part of it tumbled onto the street, striking a woman. In all five people died.

“That was the end of helicopter service from the Pan Am roof,” Shea said of the building, which is now named the MetLife. Helicopters were subsequently banned from city rooftops.

But the allure persisted.

Decades before Donald Trump was pictured lumbering onto various official aircraft as president (once with toilet paper on his shoe), he was snapped gazing at New York from a private chopper.

The caption read: “Donald Trump, real estate mogul, entrepreneur, and billionaire, utilizes his personal helicopter to get around on August 1987 in New York City.”

And billionaire ex-mayor and business tycoon Michael Bloomberg was described as a “fan of ’copters” in an April 2012 New York Times article.

“He does not merely enjoy flying in them, he is obsessive about piloting them himself,” the article recounted.

Last November, a helicopter problem arose in the middle of the row about Amazon’s announcement that it had picked the New York City borough of Queens for one of its forthcoming “HQ2” second headquarters locations.

While leading politicians welcomed the company, a storm blew up from the left over the likely exacerbation of inequality in a fast-gentrifying part of Queens, and the prospect of Amazon receiving billions in government incentives for their plan, which included a new helipad.

City councillor Ben Kallos said it made Bezos look like a “Bond Villain”.

City council speaker Corey Johnson reportedly said: “So, yes, Jeff Bezos’s commute is all set. What about the rest of the New Yorkers crammed into the subways [the city’s underground rail service] every day?”

In 1981, two people “hijacked” a tourism helicopter and flew to the federal jail in Manhattan, trying unsuccessfully to free a convicted drug dealer from a rooftop recreation area.

They were foiled by rooftop mesh, but then flew across town and escaped themselves. When Mexican drug lord Joaquin “El Chapo” Guzman, convicted in New York this year, requested outdoor recreation time while behind bars, prosecutors cited that escape attempt in their successful bid for denial.

Following the recent rooftop crash, city mayor and 2020 presidential candidate Bill De Blasio said: “I think we need a full ban on any helicopters going over Manhattan itself” except for emergency services and news outlets.

Any such ban probably wouldn’t eliminate the new airport services from the riverside heliports sitting on Manhattan’s flanks, next to the water.

So down-to-earth passengers sitting on clogged roads to JFK in their un-winged Ubers will still be able to look up from traffic jams at their uber-Uber rivals in helicopters buzzing by overhead.

Maybe they’ll wish they could afford it – or that they’d taken the train for under $10.