On January 28 and 29, the chefs will compete for the chance to carry the American flag into the international competition in Lyon, France, where they will  have five and a half hours to cook the meal of their lives: two platter presentations around seafood and meat, which will be presented to a panel of 24 judges. Dishes will be evaluated for overall harmony of flavors, presentation and techniques. 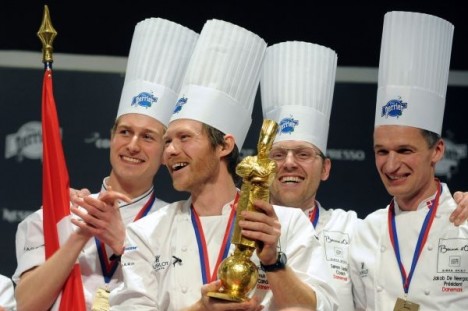 Other news from Bocuse d’Or USA Foundation include a partnership with Hermès to create two limited edition printed silk scarves.   The piece, called “à la gloire de la Cuisine Francaise,” or “the glory of French cuisine,” was designed by Robert Dumas.
The scarfs are sold at the Hermès boutique in New York and at the Hermès Los Angeles boutique.
The scarves retail at $385, with a percentage of the proceeds from its sales will go toward the Bocuse d’Or Foundation.
[adsenseyu1]